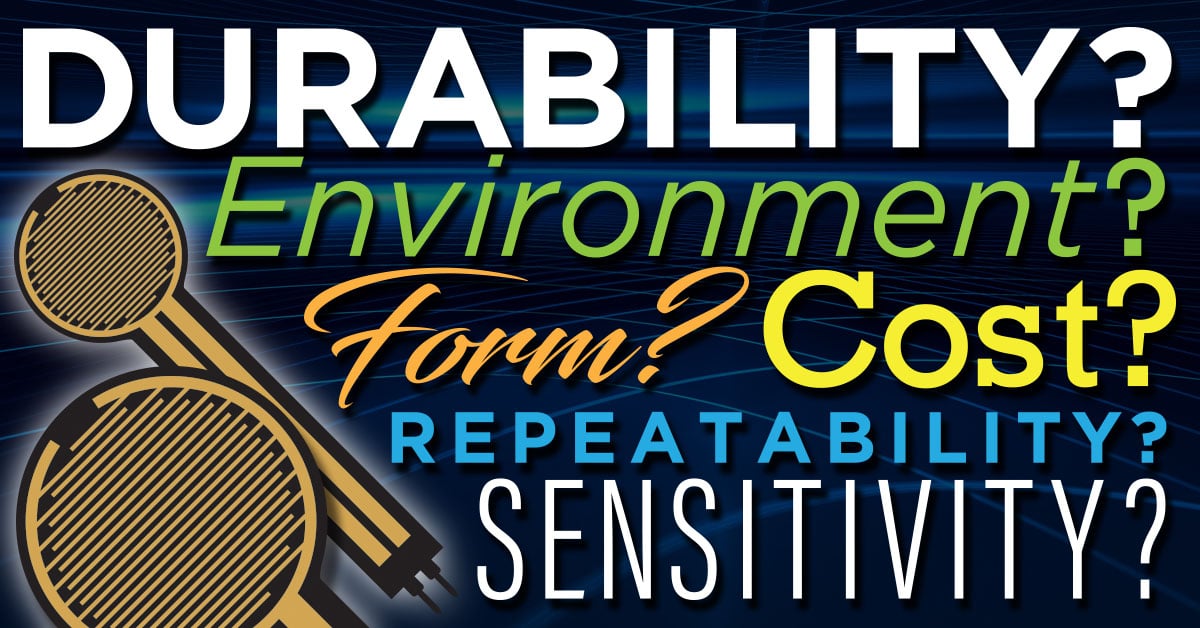 Not all force sensors are created equal. Here’s what you need to know to chose the right sensor.

Tons of products require the ability to detect and quantify force, but every approach to force-sensing technology comes with its own advantages and drawbacks, with some lending themselves better to certain applications than others. Interlink Electronics pioneered Force Sensing Resistor® technology 35 years ago, but there are other technologies—such as MEMS and open load sensors—that are also available to consider. While it may be tempting to simply adopt whichever sensor offers the most sensitivity or dynamic range, there are many other factors to consider that may not be as immediately apparent. In this post, we’ll walk you through some of the questions you need to ask yourself before choosing a force sensor. Not only will you end up with a product that is the most well suited for the job you intend for it, you may also save some money in the process by using lower-cost solutions in situations that don’t require more expensive options.

It may seem obvious, but one of the most important factors to consider when choosing a force sensor is whether it will be able to withstand the strains that it could possibly be exposed to—even those outside of the expected range. While load cells can yield ultraprecise measurements, they can also be prone to damage. For example, if you were to jump on your bathroom scale, you would likely damage the load cell sensor within, rendering it inoperable or skewing its readings. While FSRs are not as sensitive, they are much more resilient, so if your particular application doesn’t require as high a level of precision but will be exposed to rough conditions and shocks, a load cell may not be the best option.

An apropos real-world example of this principle came up when Interlink’s sensors were being considered for a handheld HMI device. The company was all set to go with a competing micro-electro-mechanical system (MEMS) force sensor until we asked them about the sensor’s breaking point—something the company’s engineers hadn’t considered. As it turns out, the particular MEMS sensor they were considering provided good resolution, but if the user accidentally dropped it (or threw it in a fit of rage, we’re not judging), it would easily break. Ultimately, their solution needed to be made robust enough to handle these unexpected situations.

If your product is only going to be used in the confines of an office or a home, the range of conditions you can expect it to be exposed to is rather narrow. After all, you can confidently rule out rain as a condition that your sensor solution needs to withstand. However, if your device is going to be used in an industrial, agricultural, medical, or automotive setting, the harsh conditions it is exposed to may affect the accuracy of its reading. FSRs perform admirably in this respect, as the force sensing elements within the devices are completely sealed off, making them resistant to dust, moisture, and dirt.

They can also withstand temperatures at the far ends of the scale. Interlink’s FSR X and UX, for example, can be operated in temperatures as cold as -25° Celsius and as hot as 85° Celsius without affecting output too significantly. Depending on its construction, load cells’ outputs can be significantly affected by temperature variation, though rugged load cells are also available that mitigate this problem. In the end, you just want to make sure you end up with a sensing solution that will operate accurately in all of the conditions under which it may be used. 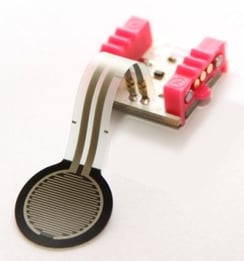 The size and shape of your product will also have a large bearing on which force-sensing technology you want to adopt for your application. Load cells are larger than most FSR and MEMS sensors, which limits their use in compact or portable devices. MEMS force sensors, on the other hand, can be made extremely small. In fact, the world’s smallest force sensor uses MEMS technology. These devices don’t come cheap though. Our FSRs have the benefit of being printed on a flexible substrate that allows the sensor to be integrated more easily into items that aren’t completely flat. They’re also extremely thin, measuring as low as 0.46 mm thick. This makes them a natural fit for applications where space is at a premium, such as in wearable devices like smart shoes.

If you plan to incorporate force-sensing capabilities into a product that needs to be manufactured in volume, part-to-part repeatability is going to become a major concern. While many force sensor manufacturers offer models that boast impressive stats on their datasheets, it’s often the case that these results are cherry-picked from among the best performing units in a production run. Actual part-to-part repeatability of some of Interlink’s leading competitors can vary by as much as ±40%, meaning you will either have to toss the parts or try to recalibrate them manually. This is a big impediment to production and will result in more deficient units and more unhappy customers. Interlink can proudly say that we offer some of the most reliable sensor manufacturing in the industry.

This issue really cuts to the heart of the importance of thoroughly understanding your project’s parameters before making a choice from among the available force sensors. Open load sensors are some of the most precise force sensors available and can be built for widely different applications. Some models used in scientific equipment can measure minuscule forces of just fractions of a Newton while others can precisely enumerate the colossal heft of multi-ton 18-wheelers at truck weighing stations. However, they tend to be bulkier than the alternatives and cost more. MEMS sensors, though smaller, also incur higher costs to produce and integrate. As mentioned earlier, FSRs are not as sensitive as MEMS or open load sensors but are much more cost effective. The sensitivity that FSRs can achieve is also improving. For example, Interlink’s new FSR X and FSR UX family of force sensors have greatly expanded sensing ranges, with the UX topping out at 150 N. This opens up your options in situations in which form factor or cost make an FSR the natural choice, but it needs to sense a larger range of forces.

It’s happened to all of us: You hop online to buy something and are greeted with a dozen permutations of the same product with different stats. Without thorough knowledge of your own needs and the capabilities of the products, you might be tempted to just buy the most expensive version with the highest numbers on the box. After all, who doesn’t want the “best?” But just because a certain force sensor advertises higher accuracy or less drift than an alternative, it’s not necessarily the most appropriate sensor for your job. It may make more sense to incorporate a sensor that isn’t as accurate—though still accurate enough for your application—but costs far less. You don’t need to add a supercharger to a Yugo, so be mindful of your actual requirements to keep costs down.

Armed with this information, you now have a solid jumping off point from which to make an informed decision about which type of force sensing technology is right for your unique application. If you do decide that the benefits of FSRs make them the best choice for you, please get in touch with one of our representatives, who can provide further information and pricing. If you would like to see detailed technical information about our various FSR families, you can download their datasheets.