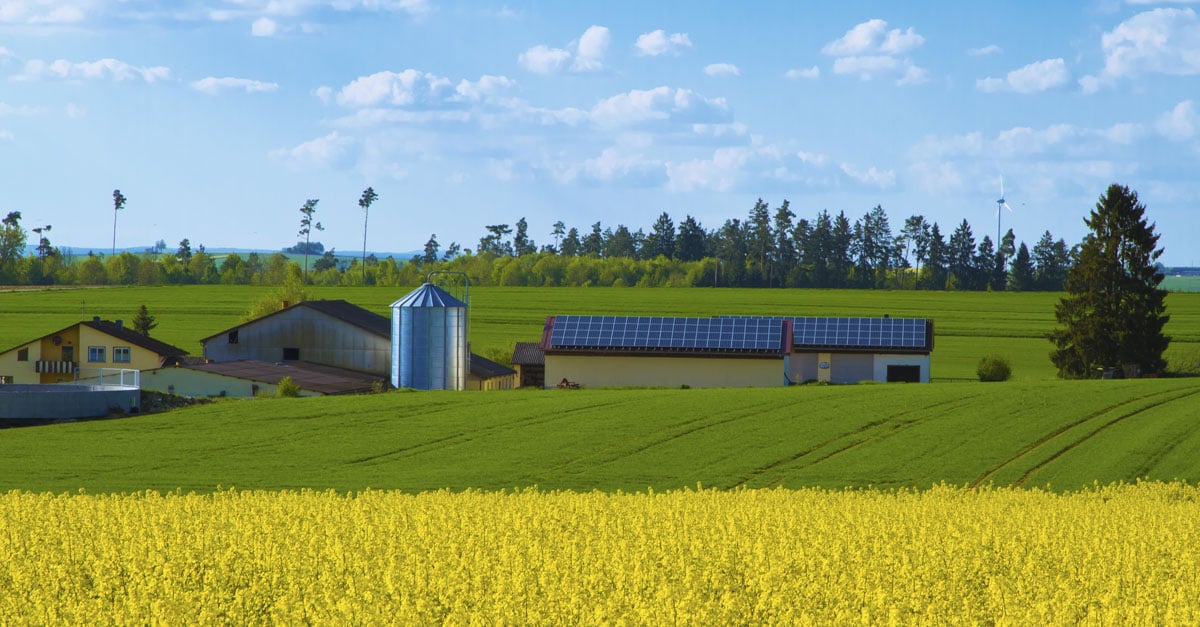 The sensors that make up the Internet of Things often have no access to power mains, but innovative technology is being used to harvest electrical current from alternative origins.

The widespread adoption of the Internet of Things (IoT) necessitates the widespread deployment of networks of sensors to collect the data it relies on to function. Depending on the application, these edge devices could be located very far from a base station and in very remote locations. This is especially true when used for agricultural or scientific purposes, as sensors may be spread across miles of fields or scattered among secluded research sites. This presents a problem for our current batch of networking technology. Standards like Wi-Fi or Bluetooth simply aren’t feasible for these applications because their effective radius is much too small. Anyone who has tried streaming Netflix from a laptop in a room across the house from your router is probably already familiar with this problem.

Fortunately, the LoRaWan networking protocol (Interlink is a member of the LoRa Alliance, an industry group dedicated to developing and promoting the LoRaWan standard) solves the data transfer end of this problem. By using radio frequency (RF) to transmit data packets, the base stations can be located miles away from edge devices (called “nodes”). In fact, the record for the maximum distance a packet has been sent via LoRaWan is 517 miles, a feat that keeps being broken as the system develops. The other major benefit of LoRaWan, and the one that inspires this blog post, is its extremely low power requirements—a factor that will prove crucial in permitting its deployment over extremely wide areas.

The same issues that make data transfer a tricky proposition for some IoT deployments also make powering these networks of sensors a logistical hurdle. Battery power (which we will discuss further below) is an obvious solution, but it has its own set of drawbacks that make it unsuitable for many cases—chief among them that all batteries eventually need to be replaced. How long a node can operate on battery power is dependent on the device, and while LoRaWan is a low-power protocol, the power needs of certain applications may demand other ways of capturing or generating power.

If widely implemented, these power sources hold the key to the IoT dream of a data-driven, constantly connected world. Here we present a few of the most intriguing examples.

The problem of providing electricity to low-power IoT devices seems like it should be able to be solved with the same technology that power most of the wireless devices we use every day, batteries. This is a fine solution for some low-power devices, it’s relatively cheap and the technology is tried-and-true. It’s an especially suitable solution if the nodes are easily accessible and their batteries are simple to replace. However, in situations where the edge device is not easily accessible—perhaps it’s a soil moisture sensor buried in a field or an industrial sensor secreted away behind hard-to-move machinery—batteries might not be the ideal solution, even if they can last for years in some situations. This is especially true in large deployments, where replacing batteries could turn into a never-ending game of whack-a-mole—a very expensive one at that. Batteries are certainly the most familiar technology on this list, but there are several more long-lasting alternatives that could prove promising. 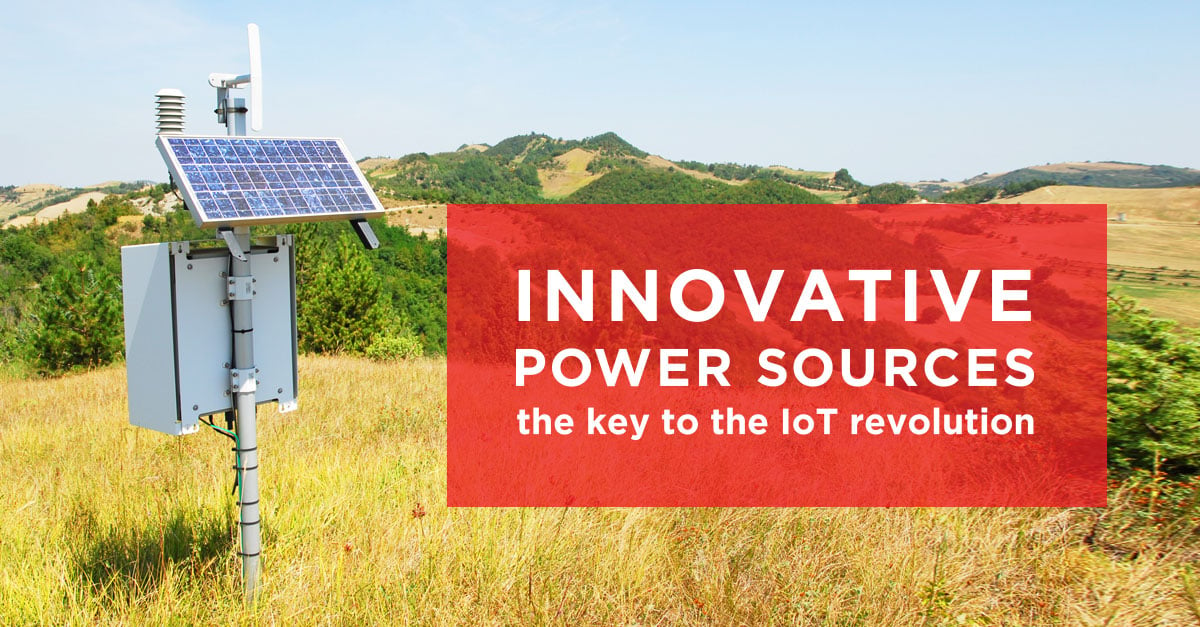 Solar power is another IoT energy option with which most of us are already familiar. In areas where conditions are right, solar panels could provide power to single devices or clusters of devices. Of course, indoor deployments or those in areas that are perpetually in shadow would not be good candidates for the technology. When paired with a rechargeable battery, these devices could operate independently for sustained periods. Solar power is also a proven technology, and photovoltaic cells have only been getting cheaper and more efficient with time. Of the energy harvesting options presented in this list, solar is capable of producing the most power. However, there are other zero-power technologies being developed for IoT applications that take more novel approaches to powering nodes.

This form of energy harvesting uses the properties of thermoelectric materials to produce electricity when there is a variation in temperature across the material (i.e., when one side is hotter than the other). This is another power solution that works extremely well in conjunction with machinery, as it often produces quite a bit of heat waste. Because these thermoelectric generators don’t have moving parts, they can operate for extremely long periods without needing to be replaced. Some wearable tech companies are even looking at incorporating thermoelectric generators into clothing, using the wearer’s own body heat to produce electricity. (Insert your own The Matrix joke here.) 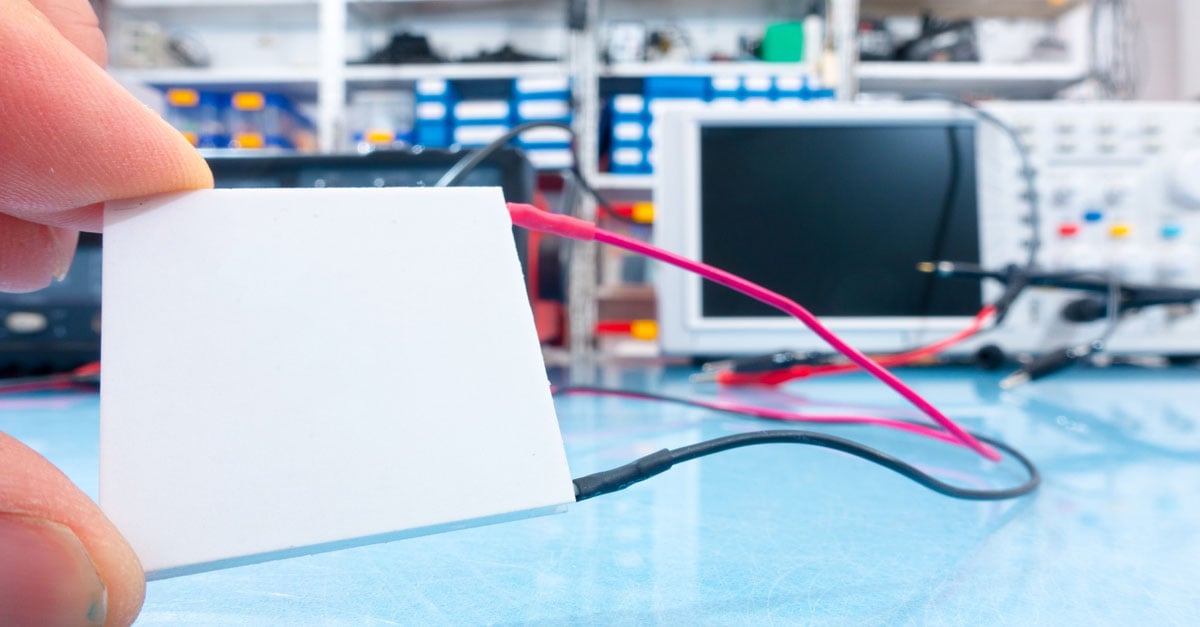 Example of a thermoelectric generator

Factories and farms are busy places full of humming machinery and rumbling vehicles. Fortunately, all this kinetic energy can be transformed into electrical energy via a process called vibrational energy harvesting. This technique uses magnetic induction to transform a moving magnetic field into electromotive force. Essentially, as long as the edge device is moving, it will be able to generate power. This is great for sensors that operate on machinery or vehicles because the vibrations they produce have a consistent direction and frequency. But don’t count out other clever applications; vibrational energy harvesting could crop up in many unexpected places. In fact, the technology is being used to power sensors on buoys at sea, using the motion of the buoys bobbing up and down on the waves to produce enough energy to power the devices.

Of all the solutions we have delved into, this is the most fanciful, allowing a device to seemingly pull power from the very air around it. In actuality, the device uses a receiving antenna to pick up ambient radio frequency (RF) signals, which it then converts into energy. So where do these RF signals come from? Well, luckily, they’re already all around us. RF signals are given off by sources including radio and TV transmitters, Wi-Fi routers, the GSM system (3G, 4G, 5G, etc.), satellite stations, and radar.

Dense urban centers have plenty of sources of ambient RF to draw power from, but even in rural environments, agricultural operations could use RF transmitters to energize their hard-to-reach devices. In fact, the long-range, low-power LoRaWan network already uses RF signals to communicate with edge devices, meaning all of its nodes will have access to some RF source that could potentially be used for power. They are impressively efficient too, with modern designs capable of converting more than 50 percent of the energy they are able to capture into usable current, making it an exciting, green source of energy to power the IoT revolution. However, that efficiency belies the main trouble with RF harvesting: signal strength. Propagation loss leads to large drop-offs in signal strength as the distance from the node to the source increases and absorption loss takes a toll when the signal has to pass through obstacles, meaning the node ideally needs to be near the RF source without any objects in between to reduce the signal. Among the power sources we have discussed, RF harvesting is currently capable of providing enough energy for only the most extremely low-power devices—though the method should become more feasible with time as technology improves and new sources of RF signals are brought online. 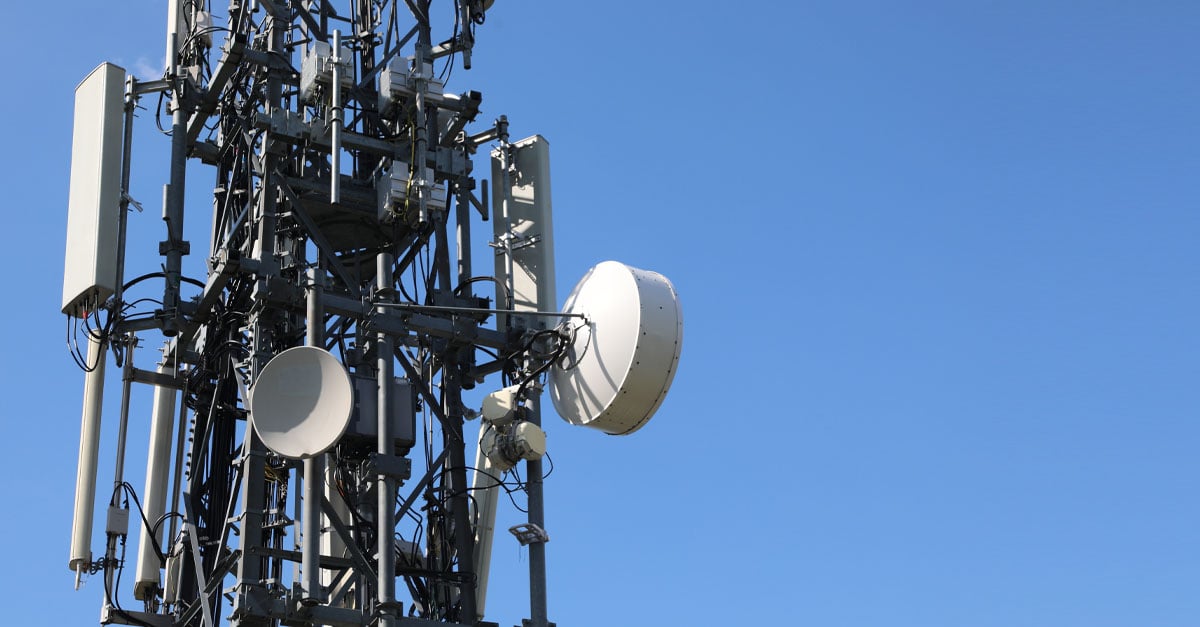 This multiplicity of power options for IoT devices means that Interlink’s sensors can truly be anywhere you want them to be. No matter how remote or inaccessible a node is, there’s a clever way to provide or harvest electricity for it. Afterall, it’s the lifeblood of the IoT revolution.

If you are interested in discussing an IoT sensing solution with one of our experts, please get in touch via our contact page.