Capacitive vs. Resistive Touchpads: How Each Works and Its Advantages 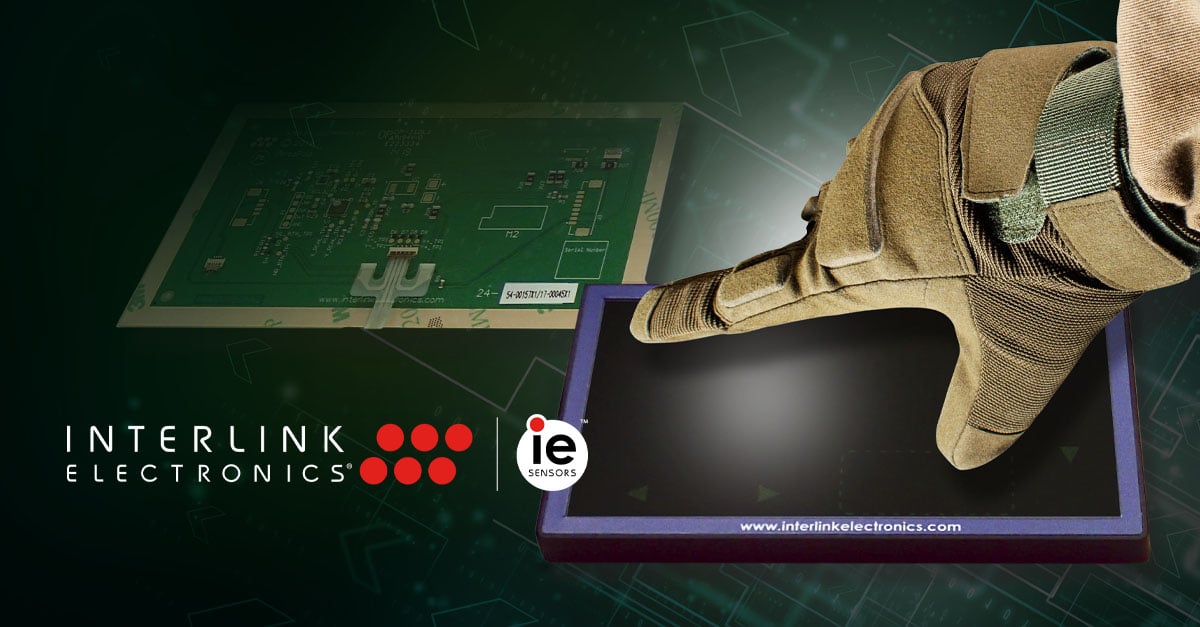 Interlink’s rugged VersaPad line of resistive touchpads offer full control in even the harshest and most unlikely conditions.

Interlink Electronics is known worldwide as the innovator of the Force Sensing Resistor (FSR). But today, we would like to focus the spotlight on another one of our core offerings—the VersaPad line of resistive touchpads (also called trackpads). Capitalizing on our expertise in force detection, Interlink’s first VersaPad model, released in the mid-1990s, distinguished itself from the rest of the touchpad pack by using pressure detection to register inputs. In the years since, we have released multiple iterations of the VersaPad—consistently adding new features and improving performance—culminating with last year’s introduction of the VersaPad Plus. However, while the technology has evolved, the most fundamental advantages of resistive technology haven’t changed.

In this post, we will explain how resistive touchpads work, as well as their benefits and disadvantages when compared with their main alternative, capacitive touchpads. 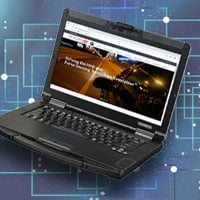 How Does a Resistive Touchpad Work?

Resistive touchpads detect pressure exerted by the user on the device, either with their fingers or some intermediary like a stylus, to interpret position and movement—providing functionality similar to that of a traditional mouse. The device’s basic construction consists of two ultrathin resistive plates precisely positioned with a small separation between them. Each resistive plate is coated with one half of the circuit using proprietary functional materials. When pressure is applied to the surface of the VersaPad, the top layer deflects at the point of contact, causing the two plates to make contact and current to flow between the two halves of the circuit. Each of the two plates has an important job to do, with one registering the position of the press on the y-axis and the other tracking the x-axis. Amalgamating this feedback tells the system exactly where and how much force is being applied at any given time. This information can then be used as inputs for mousing and other human machine interface (HMI) applications.

These devices are often put into laptops, used as standalone interfaces, or integrated into larger HMIs. However, the device’s software can also be configured for applications beyond mousing, such as using it for joystick functionality or as a multifunction button. Resistive touchpads are extremely rugged, withstanding the effects of extreme temperatures, shocks, vibrations, contamination, and electromagnetic (EMI) and radio frequency interference (RFI)—the latter two of which can be a major issue for capacitive sensing technology (our next subject of discussion) if not properly shielded. 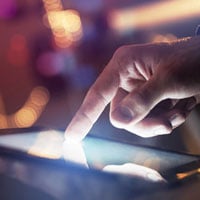 How Does a Capacitive Touchpad Work?

Capacitive touchpads detect contact by creating an electrostatic field along a conductive surface. When an object that has dielectric properties or conducts electricity—like the skin on your finger—interferes with this field through touch (or even just gets near enough to affect it), it reduces the system’s capacitance at that point. The system then determines where this disturbance occurs along the pad’s X and Y axes, which is translated into input data. This is the fundamental idea behind both surface and projected capacitive sensor—though their construction, operation, and advantages vary somewhat.

Beyond features and capabilities, another factor to consider is customizability and cost. If your application requires a solution with special dimensions, integration requirements, or interconnects, it can be much less costly to customize a resistive touchpad than a capacitive touchpad. 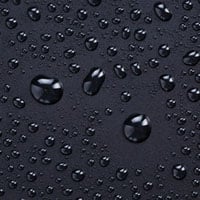 One of the most impressive benefits offered by resistive touchpads is their general hardiness. Not only do they admirably stand up to repeated use and general wear-and-tear, they can also withstand harsh environments, accidental contamination, and exposure to water. Sure, newer phones have capacitive interfaces that offer degrees of water resistance in case of an accidental dip. But the main problem faced by capacitive touchpads when exposed to liquid spills or submersions is a much more functional issue—they simply won’t work properly. Because water and many other liquids conduct electricity, spills on the surface of the pad can interfere with the electric field generated by the touchpad. These create numerous false detections and prevent the device from properly registering a user’s intended inputs. So, if you are working outdoors in the rain, you’ll find yourself struggling to wrangle the pad into performing as you expect.

Resistive touchpads circumvent this problem with their very design. They can be installed in liquid resistant or waterproof integrations (for sustained exposure), and function normally. 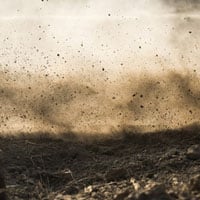 For many of the same reasons enumerated above, resistive touchpads can also stand up to exposure to dirt and grime without affecting their operation. Like liquids, these contaminants can also interfere with the capacitive device’s electrical field, thus affecting performance. With a resistive touchpad, however, no matter what is clinging to the surface of the device, it will still register the pressure from a touch, which is the only requirement for operation.

The fact that resistive touchpads can be integrated into water resistant applications also serves its dirt and grime resistance. If the device is contaminated with dust or oil, for example, it simply can be washed away with water or certain cleaners. It is certainly possible to integrate a capacitive touchpad into a contamination resistant assembly, but these housings typically have a negative impact on performance. 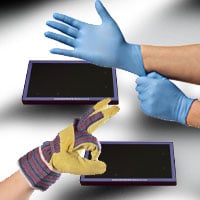 As we have discussed, resistive touchpads are often used in rugged environments. And while a device like the VersaPad can stand up to these extreme conditions, their human operators sometimes need a little help from protective equipment—gear that often includes gloves. Because capacitive touchpads depend on the conductivity of your finger to register contact, gloves can prevent these devices from detecting contact. Resistive touchpads can be operated no matter what type of gloves the user is wearing, because it is only dependent on the force of the touch.

The latest VersaPad model, the VersaPad Plus, offers one of the largest surface areas of any touchpad on the market, which gives users greater control and precision while mousing. This next-gen model also offers multi-touch controls (traditionally unavailable on resistive touchpads), special scrolling zones, and a right-click zone. 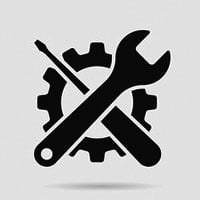 Now that we have established the advantages and disadvantages of both approaches, a picture of the best uses for resistive touchpads begins to emerge. Industrial, automotive, and in-the-field environments are all settings with high potential for devices to be exposed to contaminants—everything from water and oil to dirt and dust. Medical equipment is also a great setting for VersaPad-based interfaces. During normal operation, these rugged devices might be exposed to spills, bodily fluids, or other liquids, so the pad’s ability to function under these conditions is a must. Hospitals and other medical facilities also need to be sterile environments, which makes great use of the touchpad’s easily cleanable surface.

Military organizations require especially rugged equipment because they operate in a wide variety of theaters around the globe. Whatever the conditions they encounter, their gear needs to be able to stand up to whatever gets thrown at it—including extreme temperatures, dirty conditions, and resistance to shocks and impacts. In the case of the VersaPad, the U.S. military has used the touchpad in their field laptops for many years, depending on its reliability and ruggedness under even the harshest conditions. 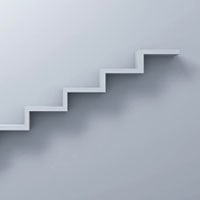 Taking the Next Steps

No need to resist; we would be thrilled to speak with you about potential applications for the either standard or custom VersaPad or VersaPad Plus resistive touchpad sensors, modules or solutions! Please reach out via the form or phone number listed on our contact page . You will be put in touch with one of our knowledgeable reps, who can answer any lingering questions and begin working on your solution.

Get Our Latest Posts in Your Inbox!

Don't miss out! Sign to be notified when new blogs are posted and stay up-to-date with industry news and insights from Interlink Electronics.

Our relationship with technology is evolving at breakneck pace. More devices than ever will need sensing, HMI, and sensor fusion technology, and Interlink is ready to provide you with the latest and most reliable information to address your multi-modal sensing needs.